Reviews You Can Trust

Joovv vs RedRush 360 – Which Is the Better Red Light Therapy Body Light? 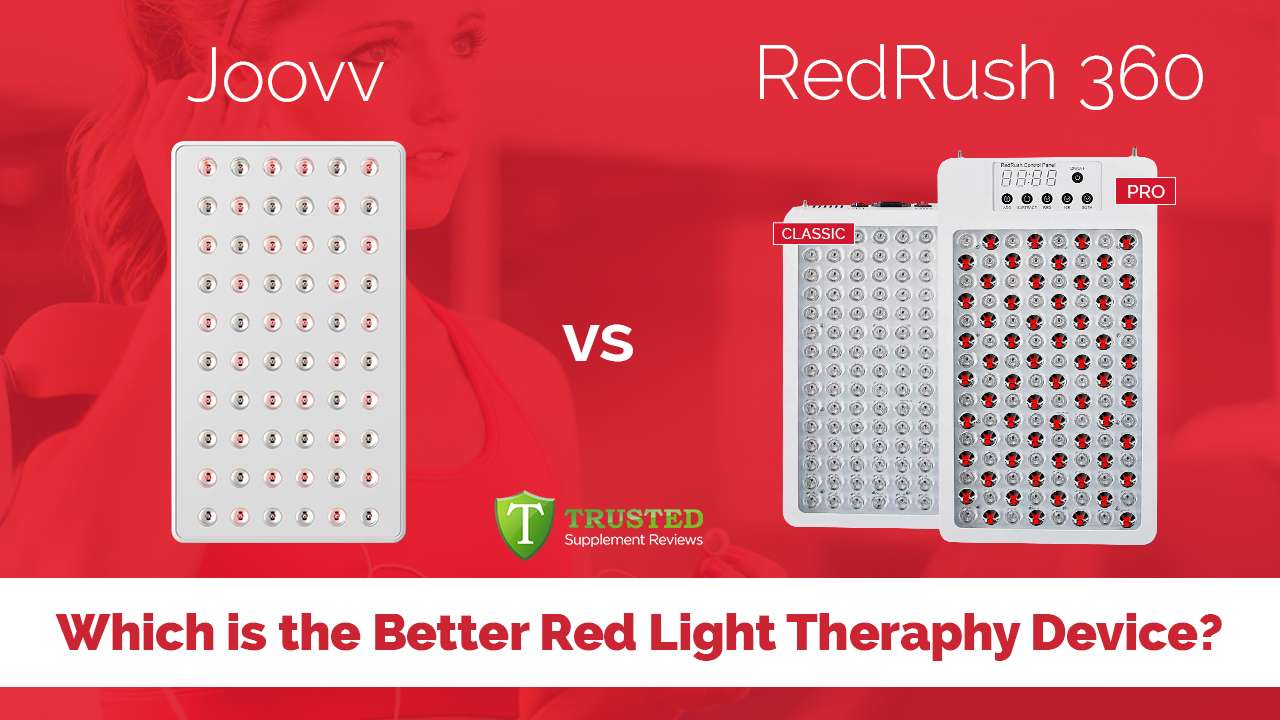 Red light therapy is a fascinating type of therapy that was developed to heal astronauts and allow them to grow plants in space.

It was quickly discovered, however, that it did a whole lot more, including helping wounds heal, regrow hair, treat skin conditions, and much more.

The result was that red light therapy quickly became incredibly popular, but it was only available in specialized salons.

Because this was inconvenient, and today’s society is one of convenience, it wasn’t long before different manufacturers started to develop at home red light therapy devices.

There are now so many to choose from, however, that it can be a little bit overwhelming.

Two specific brands of devices seem to appear as good ones, again and again, being Joovv and RedRush 360.

So which of these two should you opt for?

That’s a good question but first a deeper look at this type of light therapy.

What to Look for in Red Light Therapy

Before you can truly begin to compare different devices, you have to gain a greater understanding of what this type of therapy is and what it can do.

This starts by looking at the types of light. In all likelihood, you are aware of the existence of blue light, infrared light, and UV light.

The difference between those types of lights is their frequencies and wavelengths, each of which is more or less visible and has different effects. Light is also essential to the survival of the human body.

What scientists have discovered is that NIR (Near Infrared) light has incredible healing powers and that is the type of light you should be looking for when comparing red light therapy devices.

Red light therapy was first successfully used as a medical treatment in 1903, when Niels Ryberg Finsen won the Medicine Nobel Prize for using it to treat smallpox and lupus.

90 years later, NASA used it to treat astronauts in space, helping to limit muscle and bone loss. Since then, the healing properties of light have been extensively studied.

What has been uncovered, more specifically, is that there are five types of light within the spectrum that have an impact on the body.

Red and NIR light are the two types of light that go deepest into the cells and have a positive impact on the body.

At the same time, they are two different types of light and you do have to understand those differences to also understand what kind of red light therapy device – Joovv or RedRush 360 – is best for you.

The best type of red light therapy, therefore, is one that uses both red light and NIR light, reaching deep into the tissue and actually affecting the cells in a positive manner.

Through exposure, the healing properties of the light are absorbed and start to feed the cells.

This tells the cells to:

One of the key things to look for in a red light therapy device, be that Joovv or RedRush 360 or even another company, is a clear and concise explanation of the benefits that are known to be associated with the therapy through scientific exploration, and which benefits are likely to exist although still have to be scientifically proven.

Hence, it is now known or accepted that red light therapy (which includes red light and NIR light):

That is an impressive list of benefits, which is one of the reasons why it is so wonderful that it is now possible to access these benefits at home with a device like Joovv or RedRush 360.

But it still isn’t clear which one of the two is better.

How to Compare Joovv to RedRush 360

Joovv and RedRush 360 are both excellent devices that have been reviewed hundreds of times by individuals, therapists, chiropractors, and spa owners alike.

It is also known that they are a great improvement on the old-fashioned “cold laser” therapies that used to be offered in clinics, not in the least because the at red light therapy devices are a great deal more affordable.

It has been scientifically demonstrated that at-home red light therapy devices like Joovv and RedRush 360 are as good as the medical-grade devices used in the past, which means that you won’t buy the wrong thing, no matter which one you choose.

That being said, an increased understanding of the devices should at least enable you to choose the one that is right for you.

Experts agree that this is down to several key considerations, being:

So, if we look more specifically at Joovv and RedRush 360, how do they compare?

Another way to look at it is like this:

So which one is better?

While both devices absolutely have their pros and cons, the RedRush 360 clearly is the better option out of the two in our opinion. However, they are both best in class and you really won’t go wrong, whichever one you choose.